End of one of the last remaining links to the old Turnhouse Airport as air traffic control chief pays tribute to the now-demolished centre where he first worked.

Edinburgh Airport has said goodbye to a piece of its history with the demolition of its old Air Traffic Control tower at Turnhouse.

The old tower, which was brought into use in February 1962, was replaced with the current iconic structure in 2005.

The former tower has finally been demolished this week, in work fully documented in pictures by local resident Kevin Parnell. 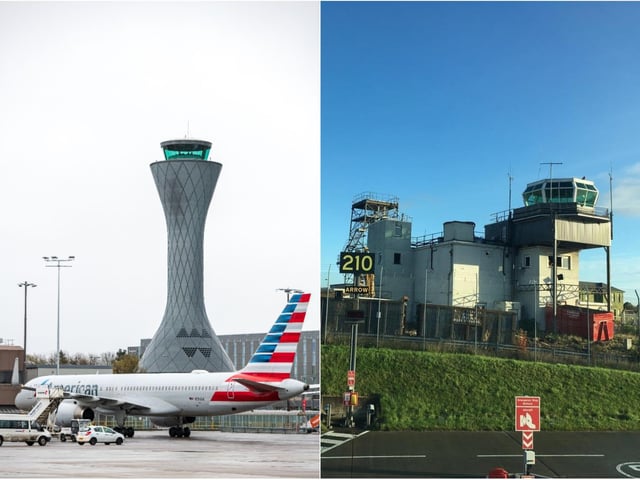 Sandy Legget, general manager of the new Air Traffic Control Tower, joined the Turnhouse tower as an air traffic engineer at the age of 21 in 1989, fresh out of college in Milton Keynes.

One of the most junior members of the team at the time, he maintained the equipment used by air traffic controllers and aircraft at the airport.

The work of the Air Traffic Control tower has changed hugely in the past 30 years, as Edinburgh Airport now copes with 15 million passengers a year, compared with five million in 1989.

But the number of people working at the Air Traffic Control tower has not changed, as there are still around 60 employees, just as in the old days, according to Mr Legget. 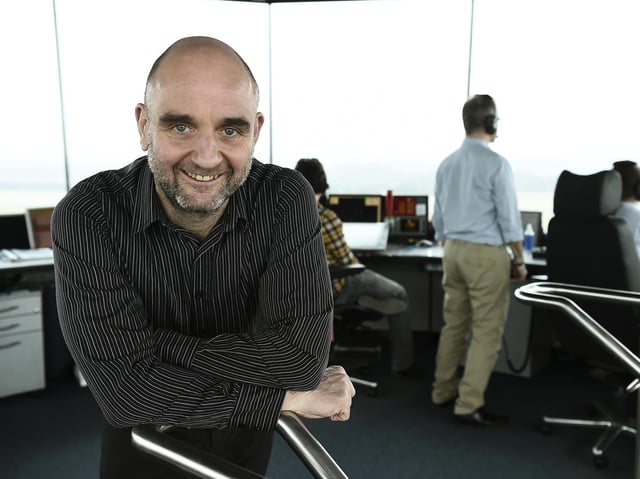 Staff are able to cope with the huge increase in passenger numbers through a combination of better technology and better management, Mr Legget said.

“By introducing new technology we’ve been able to keep up with passenger numbers. We’re always innovating and moving forward,” he said.

The new tower boasts a state-of-the art landing system, allowing suitably-equipped aircraft to land in almost all conditions of fog and misty weather.

The 57-metre-high tower stands out on the Edinburgh skyline and can be seen several miles away from the airport.

But, Mr Legget points out, the technology behind the new tower is not much different to the old one.

“The equipment is smaller and more up to date, but beyond that it hasn’t changed much,” he said.

The primary radar, which identifies the presence of aircraft, has hardly changed since Mr Legget’s early days at the old tower in 1989.

However the secondary radar, which provides information on more detailed factors such as height and speed of aircraft, is very different.

The new £10 million tower is also in a much more convenient location, near to the airfield.

History of the airport

Edinburgh Airport first came into being as Turnhouse Aerodrome, a small airbase used by the Royal Flying Corps in the First World War.

When the Royal Air Force was formed in 1918 the airfield was named RAF Turnhouse and ownership transferred to the Ministry of Defence.

At the breakout of the Second World War RAF Fighter Command took control of the airfield and a 1,190m runway was built to accommodate RAF Spitfires.

The airport remained under military control after the war, but the first commercial services were launched in the late 1947.

In 1952 the runway was extended to handle new RAF planes, and in 1956 a new passenger terminal was built to provide more commercial services.

The old Air Traffic Control tower was opened in 1962 close to the Turnhouse terminal.

The old Turnhouse terminal and hangars were converted into a cargo centre.

The Air Traffic Control tower remained at Turnhouse, some distance away from the terminal until the new £10 million tower opened in 2005 in the “ideal” location, according to Mr Legget.

‘A great place to work’

The ribbon was cut on the latest £75 million terminal extension in June this year by First Minister Nicola Sturgeon.

The expansion, which has brought in new gates, pas­senger arrival halls and ­baggage reclaim areas, is part of a £300 million upgrade to be delivered in the next five years.

While the airport has changed almost beyond recognition since the days of the Turnhouse tower, Mr Legget says the working environment has stayed the same.

“One thing that definitely hasn’t changed is the family-like atmosphere in the tower. I’m delighted we’ve been able to bring that across,” he said.

“We get lots of visitors – people want to see the airport and when they do they want to come to the Air Traffic Control tower.

“I very much enjoy working here and I’m fortunate in that it’s a great place to work.”

There are at least six people at the current tower who also worked at the old one.

A group of them went out to take one last look at the tower together before it was demolished.

But while it was a nostalgic moment, Mr Legget said he did not mourn the loss of the building too greatly.

“At the end of the day times move on,” he said.

“The new tower is a far, far better working environment, and the iconic shape is the symbol of the airport on all the marketing material.”

“I’m quite proud of it to be honest,” he added.